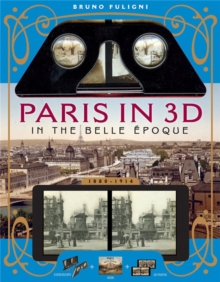 Paris in 3D in the Belle Epoque : A Book Plus Steroeoscopic Viewer and 34 3D Photos Paperback / softback

This handsome, unique package -- containing a stereoscopic viewer, 34 3D photographic cards, and a photo-packed paperback book -- offers a rare view of Paris, the world's most beautiful city, during an era when art, literature, poetry, and music blossomed and reigned. Paris during the Belle Epoque (1880-1914) was a time when peace and prosperity allowed for towering innovation in art, fashion, architecture, and gastronomy.

The city at this time was the epicenter of art and music.

Opera Garnier, Castel Beranger, Moulin Rouge, and the Paris Metro entrances were all built during this time.

Galeries Lafayette unveiled its gilded department store, which sold couture to the aspiring middle class. This burgeoning creativity and prosperity, as well as the city and the inhabitants who embraced it, are all captured here, with stunning clarity and realism.

Paris in 3D's innovative and inimitable package includes a sturdy metal stereoscopic viewer, 34 rarely seen stereoscopic photographs of the city at the turn of the century, and an accompanying 128-page paperback, which provides a brief history of the stereograph craze and an overview of the city's evolution during that time.