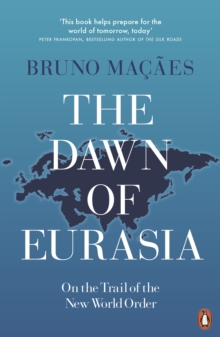 The Dawn of Eurasia : On the Trail of the New World Order EPUB

In this original and timely book, Bruno Ma es argues that the best word for the emerging global order is 'Eurasian', and shows why we need to begin thinking on a super-continental scale. While China and Russia have been quicker to recognise the increasing strategic significance of Eurasia, even Europeans are realizing that their political project is intimately linked to the rest of the supercontinent - and as Ma es shows, they will be stronger for it.

Weaving together history, diplomacy and vivid reports from his six-month overland journey across Eurasia from Baku to Samarkand, Vladivostock to Beijing, Ma es provides a fascinating portrait of this shifting geopolitical landscape. As he demonstrates, we can already see the coming Eurasianism in China's bold infrastructure project reopening the historic Silk Road, in the success of cities like Hong Kong and Singapore, in Turkey's increasing global role and in the fact that, revealingly, the United States is redefining its place as between Europe and Asia.

An insightful and clarifying book for our turbulent times, The Dawn of Eurasia argues that the artificial separation of the world's largest island cannot hold, and the sooner we realise it, the better.