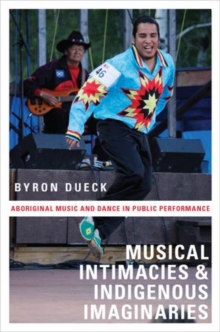 In considering these genres and the contexts in which they are performed, author Byron Dueck outlines a compelling theory of musical publics, examines the complex, overlapping social orientations of contemporary musicians,and shows how music and dance play a central role in a distinctive indigenous public culture. Dueck considers a wide range of contemporary aboriginal performances and venues-urban and rural, secular and sacred, large and small.

Such gatherings create opportunities for the expression of distinctive modes of northern Algonquian sociability and for the creative extension of indigenous publicness.

In examining these interstitial sites-at once places of intimate interaction and spaces oriented to imagined audiences-this volume considers how Manitoban aboriginal musicians engage withaudiences both immediate and unknown; how they negotiate the possibilities mass mediation affords; and how, in doing so, they extend and elaborate indigenous sociability. Musical Intimacies brings theories of public culture from anthropology and literary criticism into musicological and ethnomusicological discussions while introducing productive new ways of understanding North American indigenous engagement with mass mediation.

It is a unique work that will appeal to students and scholars of popular music, musicology, music theory, anthropology, sociology, and cultural studies.

It will be necessary reading for students of American ethnomusicology, FirstNations and Native American studies, and Canadian music studies.