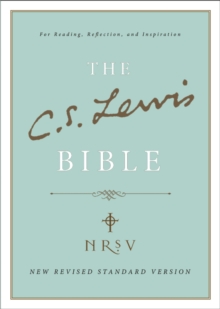 A beautiful new edition of the Bible, annotated with writings from the works of C.

S. Lewis. C. S. Lewis was one of the intellectual giants of the twentieth century.

His famous and hugely influential writings on Christianity remain as popular today as they ever were.

Now, for the first time, they are incorporated into an edition of the Bible. The C. S. Lewis Bible contains the trusted New Revised Standard Version (NRSV) text of the Bible, with over five hundred writings by C.

S. Lewis placed alongside relevant passages throughout the text. From The Screwtape Letters and Mere Christianity, to The Four Loves and Reflections on the Psalms, extracts from all of C.

S. Lewis' work appear in this beautiful Bible, which is printed in two colours throughout.