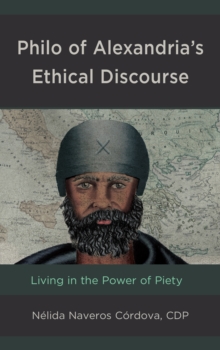 Philo of Alexandria's Ethical Discourse : Living in the Power of Piety Hardback

Philo of Alexandria's Ethical Discourse: Living in the Power of Piety proposes a fresh approach to better understand Philo's ethics exploring the virtue of piety.

In this exceptionally well-researched book, Nelida Naveros Cordova analyzes five major uses of piety in Philo's treatises- piety and the Decalogue; piety as a foundational virtue; piety as the opposite of impiety; the practice of piety, and the relationship between piety and love of humanity.

Naveros carefully examines each of these five uses within both the Hellenistic Jewish and Greek philosophical traditions, focusing particularly on piety's primary role in Philo's teaching about the acquisition of virtues and the avoidance of vices.

Naveros argues that in his ethical discourse, Philo incorporates language familiar in ancient Greek philosophical ethical systems to attribute qualities and powers to the virtue of piety.

This book illustrates the way Philo moves beyond both Hellenistic Jewish and Greek philosophical traditions by comprehensively showing how he develops the place of piety, from being a subordinate virtue in Greek catalogue of virtues to becoming a foundational virtue.

Naveros brings evidence from ancient Greco-Roman and major Hellenistic Jewish texts as well as modern secondary literature in order to argue and support a plausible case for the understanding of Philo's unique configuration of his own ethical discourse, his view of virtue ethics, and his philosophical stance.

To date, this is an original study on Philo's ethics, and the first to offer the fullest evaluation of piety within the categories of ancient ethical systems.