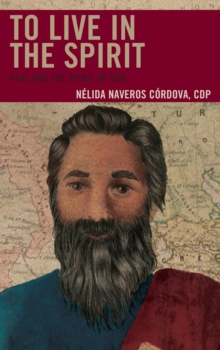 To Live in the Spirit: Paul and the Spirit of God brings to light a fresh understanding of the Greek concept (spirit) in Paul's ethical teaching.

Placing Paul and his mixed audience within the Hellenistic Jewish and Greek (philosophical) traditions of the ancient world, this book examines his new message concerning 's primary function in the acquisition of virtues and avoidance of vices.

Looking in detail at the various ways in which Paul views in his seven undisputed letters, Naveros Cordova explores 's development from Paul's initial ethical reflections in his early letters to a more mature view in his later letters.

Naveros Cordova argues that it is within these traditions, represented by major Hellenistic Jewish and Greco-Roman writers, that Paul construes the framework of his ethical teaching.

Paul finds in the power of God's a new ethical alternative for his mixed audience to living lives pleasing to God outside the observance of the Mosaic Law.

Naveros Cordova demonstrates how Paul draws upon Platonic (immaterial ) and Stoic (material ) language that would have been familiar to his hearers in the early Christian communities to create a persuasive understanding of ethical performance and to show that the moral life of the believers springs from that received from God.

In his efforts to highlight 's central role in his ethics, Paul moves beyond both traditions by describing the "Christification" of not only in Stoic terms, but also in Middle Platonic categories of the first century CE.