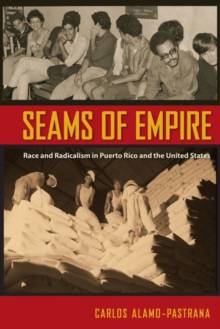 Seams of Empire : Race and Radicalism in Puerto Rico and the United States Paperback / softback

A truly excellent contribution that unearths new and largely unknown evidence about relationships between Puerto Ricans and African-Americans and white Americans in the continental United States and Puerto Rico.

Alamo-Pastrana revises how race is to be studied and understood across national, cultural, colonial, and hierarchical cultural relations."-Zaire Zenit Dinzey-Flores, author of Locked In, Locked Out: Gated Communities in a Puerto Rican City Puerto Rico's colonial relationship with the United States and its history of intermixture of native, African, and Spanish inhabitants has prompted inconsistent narratives about race and power in the colonial territory.

Departing from these accounts, early twentieth-century writers, journalists, and activists scrutinized both Puerto Rico's and the United States's institutionalized racism and colonialism in an attempt to spur reform, leaving an archive of oft-overlooked political writings. In Seams of Empire, Carlos Alamo-Pastrana uses racial imbrication as a framework for reading this archive of little-known Puerto Rican, African American, and white American radicals and progressives, both on the island and the continental United States.

By addressing the concealed power relations responsible for national, gendered, and class differences, this method of textual analysis reveals key symbolic and material connections between marginalized groups in both national spaces and traces the complexity of race, racism, and conflict on the edges of empire.