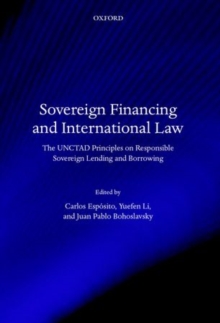 The regulation of sovereign financing is a highly topical and significant issue, in the light of continuing global financial turmoil.

This book assesses the role of international law in sovereign financing, addressing this issue from both legal and economic standpoints.

It takes as a starting point the recent report 'Principles on Responsible Sovereign Lending and Borrowing' by the United Nations Conference on Trade and Development (UNCTAD).

This report was endorsedby the United Nations General Assembly in its December 2011 Resolution on Debt, which emphasized the need for creditors and debtors to share responsibility for preventing unsustainable debt situations and encouraged all stakeholders to pursue the ongoing discussions within the framework of theUNCTAD Initiative. Investigating the legal and economic basis for the principles which were articulated in the report, the book develops a detailed and nuanced analysis of the controversial and complex issues they raise, including those concerning finance and credit rating agencies, contingent liabilities, debt management, corruption, fiduciary relations and duties, Collective Action Clauses, and the role of the EU and UN.

Ultimately, it argues that the principles elaborated in the report correspond with generalprinciples of international law, which provide a strong, pre-existing foundation upon which to build responsible principles for sovereign financing.