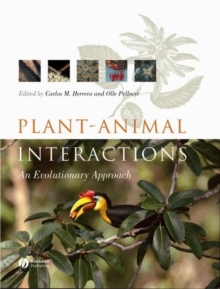 Ever since Darwin's depiction on the final page of "The Origin of Species" of a tangled bank teeming with plants and animals, the importance of species interactions in molding their ecology and evolution has become ever more apparent.

Attraction, deception, attack, defense, escape and tolerance- all are core terms of evolutionary ecology that convey the central role of interactions.

The diversity of structure, behavior, psychology, and ecology among plants and animals reflects the outcomes of antagonistic and mutually beneficial relationships.

In fact, much of the extraordinary diversity of plants and animals on the planet derives from their interactions."Plant-Animal Interactions: An Evolutionary Approach" is intended for graduate and upper-level undergraduate courses. Following a general introduction emphasizing the role of interactions in the evolution of biodiversity, chapters are devoted to the fossil record-plant-animal interactions, herbivory by insects and vertebrates, seed predation, pollination and seed dispersal by animals, ant-plant interaction, and synthesis that describes emerging areas of study, including the pivotal role of plant-animal interactions in conservation biology.