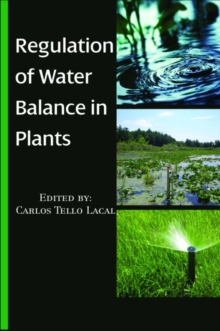 The Earth's atmosphere challenges plants with the contradictory needs of maximizing CO2 uptake and minimizing water loss, which these organisms meet by tightly regulating their water uptake, long-distance transport and evapotranspiration rates.

When challenged with drought stress, plants trigger a plethora of signaling mechanisms aimed at activating adaptive responses that help them cope with this adverse condition.

Through the compilation of open access peer-reviewed articles, the present book provides a detailed overview of the strategies enabling plants to maintain their water homeostasis despite changing environmental conditions.

In Chapter number 1, the editor introduces the different subfamilies of plant aquaporins, explains the main mechanisms controlling their activity and describes their roles in regulating plant water homeostasis.

The author of the study presented in Chapter 2 modified a mathematical model describing soil water infiltration and redistribution to include root growth and distribution, water uptake and effect of drought on this parameter, and soil evaporation.

In Chapter 3, rice is employed as an example to dissect the different adaptive mechanisms that plants have developed against drought stress.

The next three chapters explore the natural variation of traits conferring drought tolerance.

In Chapter 4, sap flux measurement is employed to investigate the water use patterns of four different tropical bamboo species.

Chapters 7 and 8 deepen in the molecular basis of drought tolerance.

While the former reviews the main transcription factor families involved in the activation of drought-responsive genes, the latter explores the molecular mechanisms leading to the onset of drought tolerance in order to identify candidate genes that can be employed in breeding programs.

Through a reverse genetics approach, the authors of the study described in Chapter 9 functionally characterized a protein kinase functioning as a negative regulator of drought signaling in barley.

The role of the micronutrient Cl- in regulating plant water balance is revealed by the authors of the study presented in Chapter 10.

Authors of the paper presented in Chapter 12 studied water balance by manipulating the environmental conditions controlling root and stomatal development.

The last block of four chapters explores the mechanisms governing stomatal movements in response to changes in water status.