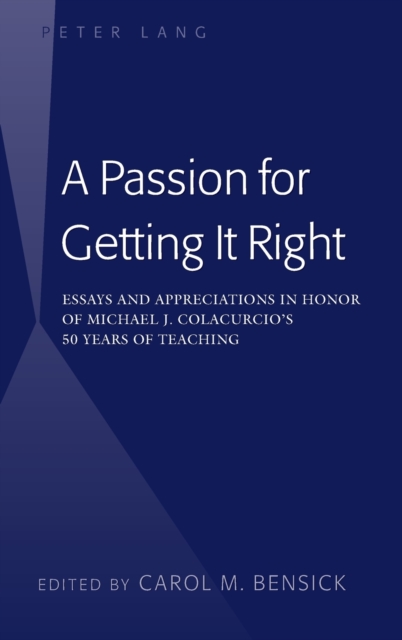 A Passion for Getting It Right : Essays and Appreciations in Honor of Michael J. Colacurcio's 50 Years of Teaching Hardback

For 50 years Michael J. Colacurcio has been a leader in the criticism of early and antebellum American literature.

In The Province of Piety, New Essays on The Scarlet Letter, Doctrine and Difference, and Godly Letters, as well as editions and often-reprinted reviews and essays, Dr. Colacurcio has continued to defend a rare vision of the political and intellectual depth of America's serious fiction and the aesthetic power and charm of its religious poetry and prose.

In light of many honors such as the Book of the Year Award from the Conference of Christianity and Literature and election in 2007 to the American Academy of Arts and Sciences, UCLA raised him to the rank of Distinguished Professor.

Yet for all his dedication to research, his students know him as an unforgettable teacher, who has continued to win several teaching awards at both Cornell and UCLA.

The present volume aspires to celebrate Dr. Colacurcio's 50 years of transformative teaching through an exciting bounty of original and classic essays by some of his most talented students and eminent colleagues from his very first years at Cornell up to and including his current students at UCLA.