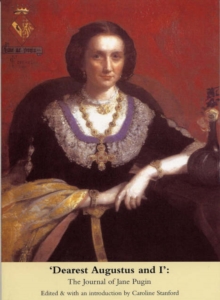 Dearest Augustus and I : The Journal of Jane Pugin Paperback / softback

Jane Knill became the third wife of the great architect and designer Augustus Pugin in 1848.

Jane, whom is described by Pugin as a 'first-rate Gothic woman', kept an intermittent journal which is published here for the first time.

It covers the four brief years of her marriage to a most brilliant man, who sadly died aged only 40.

Like her husband, Jane was a devout convert to Roman Catholicism.

She became step mother to his six children and bore him two more of her own.

Her journal tells of her life at the Pugin home, The Grange, Ramsgate; of Christmas revelries, troubles with servants, picnics on the cliffs and a trip to France.

Still more poignant is Jane's account of her husband's last months, as a lifetime's propensity to nervous exhaustion, made worse by mercury poisoning, resulted in a decline into madness and death.

Here is the voice of a Victorian woman as she lived through both daily life and scenes of high personal drama; her story makes compelling reading.