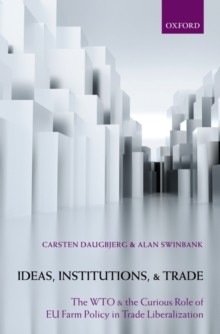 Ideas, Institutions, and Trade : The WTO and the Curious Role of EU Farm Policy in Trade Liberalization Hardback

Agriculture has a small, and declining, importance in employment and income generation within the EU, but a political importance well beyond its economic impact.

The EU's common agricultural policy (CAP) has often been the source of conflict between the EU and its trade partners within first the GATT, and then the WTO.

In the Doha Round agriculture was again a sticking point, resulting in setbacks and delays.

The position of the EU is pivotal. Due to thecomparatively limited competitiveness of the EU's agricultural sector, and the EU's institutionally constrained ability to undertake CAP reform, the CAP sets limits for agricultural trade liberalization blocking progress across the full compass of the WTO agenda.

Therefore, the farm trade negotiation, with theCAP at its core, is the key to understanding the dynamics of trade rounds in the WTO.

The book, written by a political scientist and an agricultural economist, applies theory on ideas to explain how the agricultural sector came to be included in the Single Undertaking that resulted in the Uruguay Round agreements, and how this led to a dynamic interplay between CAP reform and the possibility of further agricultural trade liberalization within the WTO, thereby providing useful insights intointernational trade relations.