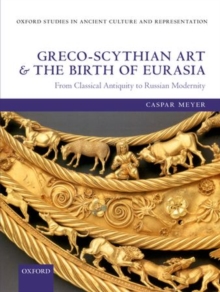 Greco-Scythian Art and the Birth of Eurasia : From Classical Antiquity to Russian Modernity Hardback

Part of the Oxford Studies in Ancient Culture Representation series

Since their discovery in nineteenth-century Russia, Greco-Scythian artefacts have been interpreted as masterpieces by Greek craftsmen working according to the tastes of the Scythian nomads and creating realistic depictions of their barbarian patrons.

Drawing on a broad array of evidence from archaeology, art history and epigraphy to contextualize Greco-Scythian metalwork in ancient society, this volume confronts the deep confusion between ancient representation andhistorical reality in contemporary engagements with classical culture.

It argues that the strikingly life-like figure scenes of Greco-Scythian art were integral to the strategies of a cosmopolitan elite who legitimated its economic dominance by asserting an intermediary cultural position between thesteppe inland and the urban centres on the shores of the Black Sea.

Investigating the reception of this 'Eurasian' self-image in tsarist Russia, Meyer unravels the complex relationship between ancient ideology and modern imperial visions, and its legacy in current conceptions of cultural interaction and identity. With a synthesis of material evidence never yet attempted, this volume breaks significant new ground in explaining the archaeology of Scythia and its ties to inner Asia and classical Greece, the intersection between modern museum display and visual knowledge, and the intellectual history of classics in Russia and the West.