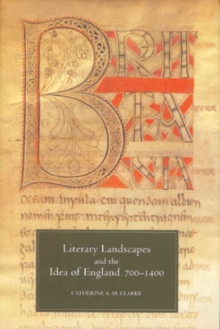 Literary Landscapes and the Idea of England, 700-1400 Hardback

In its exploration of literary representations of ideal landscapes and the production of English identity across Latin and vernacular texts from Bede to Chaucer, this study looks in particular at pastoral and locus amoenus traditions in Medieval English literature, and the early mythologisation of English landscape, space and identity through pastoral topoi. From Bede's Ecclesiastical History and its seminal interpretation of Britain as the delightful island, the study moves through representations of landscape in Old English poetry to the exploitation of the symbolic potential of their local landscapes by regional monastic houses in twelfth- and thirteenth-century texts and pastoral conventions, performances and the idea of the city in the fourteenth century.

Introductory and concluding sections form bridges to current scholarship on representations of Englishness through pastoral topoi in the Early Modern period. Catherine A.M. Clarke is Professor of English, University of Southampton.