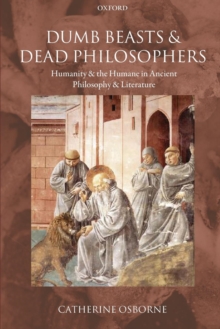 Dumb Beasts and Dead Philosophers : Humanity and the Humane in Ancient Philosophy and Literature Paperback / softback

Animal rights do not feature explicitly in ancient thought.

Indeed the notion of natural rights in general is not obviously present in the classical world.

Plato and Aristotle are typically read as racist and elitist thinkers who barely recognise the humanity of their fellow humans.

Surely they would be the last to show up as models of the humane view of other kinds?

In this unusual philosophy book, Catherine Osborne asks the reader to think again.

She shows that Plato's views on reincarnation and Aristotle's views on the souls of plants and animals reveal a continuous thread of life in which humans are not morally superior to beasts; Greek tragedy turns up thoughts that mirror the claims of rights activists when they speak for the voiceless; the Desert Fathers teach us to admire the natural perceptiveness of animals rather than the corrupt ways of urbanman; the long tradition of arguments for vegetarianism in antiquity highlights how mankind's abuse of other animals is the more offensive the more it is for indulgent ends.

What, then, is the humane attitude, and why is it better?

How does the humane differ from the sentimental? Is there a truth about how we should treat animals? By reflecting on the work of the ancient poets and philosophers, Osborne argues, we can see when and how we lost touch with the natural intelligence of dumb animals.