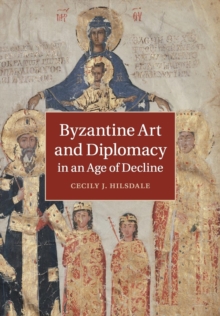 Byzantine Art and Diplomacy in an Age of Decline Paperback / softback

The Late Byzantine period (1261-1453) is marked by a paradoxical discrepancy between economic weakness and cultural strength.

The apparent enigma can be resolved by recognizing that later Byzantine diplomatic strategies, despite or because of diminishing political advantage, relied on an increasingly desirable cultural and artistic heritage.

This book reassesses the role of the visual arts in this era by examining the imperial image and the gift as reconceived in the final two centuries of the Byzantine Empire.

In particular it traces a series of luxury objects created specifically for diplomatic exchange with such courts as Genoa, Paris and Moscow alongside key examples of imperial imagery and ritual.

By questioning how political decline refigured the visual culture of empire, Cecily J.

Hilsdale offers a more nuanced and dynamic account of medieval cultural exchange that considers the temporal dimensions of power and the changing fates of empires.