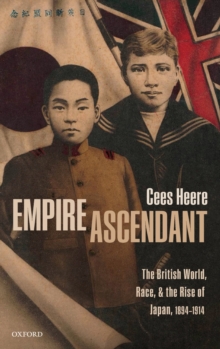 In 1902, the British government concluded a defensive alliance with Japan, a state that had surprised much of the world with its sudden rise to prominence.

For the next two decades, the Anglo-Japanese alliance would hold the balance of power in East Asia, shielding Japan as it cemented its regional position, and allowing Britain to concentrate on meeting the German challenge in Europe.

Yet it was also a relationship shaped by its contradictions.

Empire Ascendant examines how officials and commentators across the British imperial system wrestled with the implications of Japan's unique status as an Asian power in an international order dominated by European colonial empires.

On the settlement frontiers of Australasia and North America, white colonial elites formulated their own responses to the growth of Japan's power, charged by the twinned forces of colonial nationalism and racial anxiety, as they designed immigration laws toexclude Japanese migrants, developed autonomous military and naval forces, and pressed Britain to rally behind their vision of a 'white empire'.

Yet at the same time, the alliance legitimised Japan's participation in great-power diplomacy, and worked to counteract racist notions of a 'yellow peril'.

By the late 1900s, Japan stood at the centre of a series of escalating inter-imperial disputes over foreign policy, defence, migration, and ultimately, over the future of the British imperial system itself.

This account weaves together studies of diplomacy, strategy, and imperial relations to pose searching questions about how Japan's entry into the 'family of civilised nations' shaped, and was shaped by, ideologies of race.