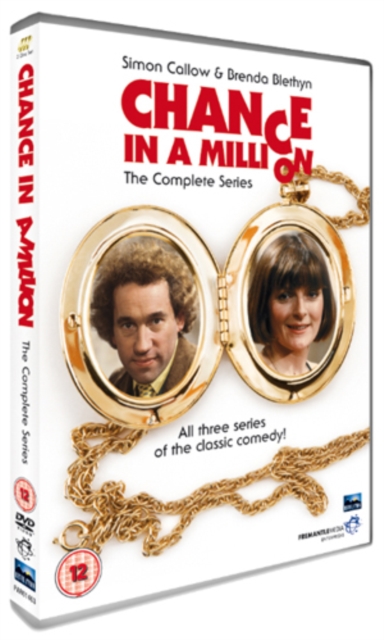 Chance in a Million: The Complete Series DVD

All 18 episodes of the 1980s Channel 4 sitcom starring Simon Callow and Brenda Blethyn.

Tom Chance (Callow) spends his life immersed in incidents that would take a million-to-one chance for most people but have become a matter of course for him.

Along with his long-suffering girlfriend Alison (Blethyn), he faces a seemingly endless series of bizarre coincidences.

Series 1 episodes are: 'Plumstones', 'Honour Thy Father and Mother', 'Flowing With the Tide', 'The Birthday Party', 'Man of Iron' and 'Stuff of Dreams'.

Series 2 episodes are: 'The Taxman Cometh', 'For Whom the Bell Tolls', 'The Lost Weekend', 'And What Shall We Do for a Ring?', 'Winning Streak' and 'Naming the Day'.

Series 3 episodes are: 'Goodbye Mr Hemstridge', 'Guess Who's Not Coming for Dinner', 'The Blessing', 'The Once and Future Chance', 'Pre-Matrimonial Tension' and 'The Wedding'.