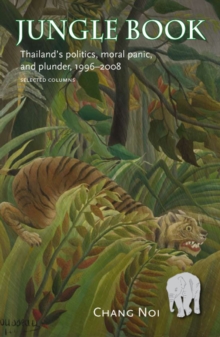 The coup leader who believed he was the reincarnation of an eighteenth-century king.

The godfather who was slashed to death by a machete on the orders of his son.

The party boss who taught his followers how to negotiate corruption with hand signals.

The general whose political career charts the destructionof Burmese forests. Thai politics often seem wild. For a dozen years, Chang Noi (the pseudonym means Little Elephant) has been stomping around this jungle, kicking up leaves, overturning rotten wood, and trumpeting in distress.

This selection from the widely read column in The Nation newspaper provides lively, readable commentary on twelve years of change in Thailand's politics, society, culture, and environment.

Drawing on a long-range historical perspective and an ample supply of dry humor, the columns have sometimes provoked Thailand's richest and most powerful figures to threaten lawsuits.

This collection is a rich and fascinating kaleidoscope of the political and social jungle that is Thailand. Chang Noi first padded onto The Nation's editorial pages in April 1996.

The name is a thinly veiled pseudonym for Pasuk Phongpaichit and Chris Baker, authors of Thaksin: The Business of Politics in Thailand and Thailand's Boom and Bust.