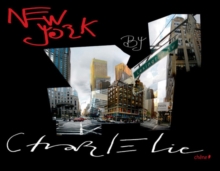 This book is dedicated to his work as an artist. He became famous in 1981 with the huge success of his album 'Poemes rocks', and his hit song "Comme un avion sans ailes" (Like a plane without wings).

Pleased with his success as a singer, but disappointed not to have made his break as an artist, he left for the US in 2004 to experience full freedom as an artist and photographer.

He regularly exhibits his work in both Paris and New York. He sees this move to New York as the starting point of a full remodeling of his work as an artist.

It is there that he found the core of what his work is about.

This is why his photography of New York both incarnates and gives off energy, be it in abandoned lots or construction zones.

He creates his images using digital photo reconstruction - like scenes from everyday life seen through a kaleidoscope.

CharlElie is a graduate of the Aecole des Beaux-Arts, with a highly refined sense of composition and a particular taste for mise en scene. He draws on these strenghts to juxtapose and reinterpret the random elements he encounters in his wanderings in and around Manhattan.

His images capture the essence of light. They pulsate with electrifying colours that resound like the thrusting, syncopated rhythms of New York - a city filled with excitement, and open to art and creativity of every kind.