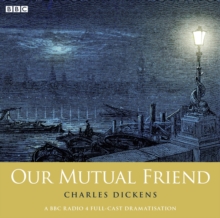 But he finds he is only eligible if he marries Bella Wilfer.

To observe her character he assumes another identity and secures work with his father's foreman, Mr Boffin, who is also Bella's guardian.

Our Mutual Friend was Charles Dickens' last complete novel and is a satiric masterpiece about money.

Part 2 of the Woman's Hour Drama contains episodes 11-20 and concludes the story.