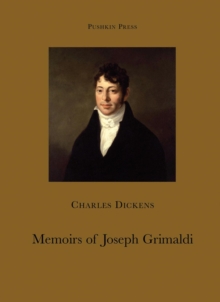 In 1837 Charles Dickens, then twenty-five years old, was asked to 'tidy up' Joseph Grimaldi's autobiography - he ended up re-writing most of it.

Joseph Grimaldi (1778-1837), one of the greatest English clowns and pantomimes of all time, was born in London to an Italian ballet-master and a dancer in the theatre's corps-de-ballet.

The death of Grimaldi's father when he was nine plunged the family into debt.

Grimaldi's fame as a pantomime clown was unequalled and he is credited as an innovator.

He introduced the tradition of audience participation, of poking fun at spectators, and generally the modern concept of the clown as such.

He died a poor and physically crippled man.