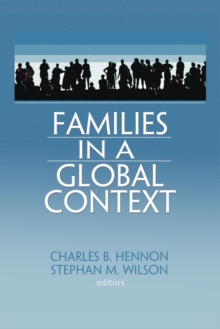 Learn what trends and factors are influencing families globally How are families the same or different around the world?

Families in a Global Context puts the similarities and differences into perspective, presenting an in-depth comparative analysis of family life in 17 countries around the world.

The framework allows readers to do comparative reflection across several countries on a variety of daily living elements, including social and economic forces such as urbanization and modernization, changes in gender/courtship/spousal patterns, and war.

This book provides an informative illustration of current as well as future trends of family life worldwide.

Each chapter in Families in a Global Context describes customary types of family patterns within each country's social organization and culture.

Important social, economic, political, and other trends are explored in detail, and major ethnic, religious, or other subcultures are noted emphasizing marriage and family patterns that differ from the more typical ones.

The book is extensively referenced and includes tables to clearly present data.

Countries explored in Families in a Global Context include: European countries of Wales, Sweden, Germany, Romania, and Italy African countries of Sierra Leone, South Africa, and Kenya Middle Eastern countries of Turkey and Iran Asian and Oceanian countries of India, China, the Philippines, and Australia Latin American countries of Brazil, Mexico, and Cuba Topics discussed for each country in Families in a Global Context include: demographics mate selection patterns with an emphasis on the dynamics of couple formation marital roles the place and role of children and parenting in families socialization for gender roles differences in education, employment, and other opportunities major stressors affecting families, coping, and adaptation aging and life expectancy issues and much more!

Families in a Global Context is an insightful resource for researchers, educators, and advanced undergraduate and graduate students investigating comparative family topics of family life around the world and in cultural context.