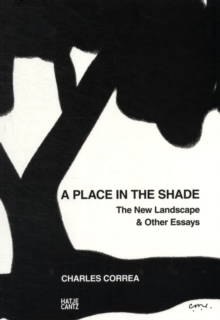 Charles Correa : A Place in the ShadeThe New Landscape & Other Essays Paperback / softback

Charles Correa (1930-2015) played a pivotal role in the shaping of postcolonial architecture in India.

He has also been a pioneer in addressing crucial issues of housing and urbanization in the Third World, including the proliferation of squatters.

This anthology assembles a selection of essays and lectures whose subjects range from the metaphysical to the decidedly pragmatic and deal with architecture, urban planning, landscape, and individuals such as Le Corbusier, Isambard Brunel, and Mahatma Gandhi.

It also contains a reprint of his seminal book The New Landscape (1985), long out of print, on urban development in the Third World.Correa has been awarded the Gold Medal of the Royal Institute of British Architects, the Aga Khan Award for Architecture, and the Japanese Praemium Imperiale.