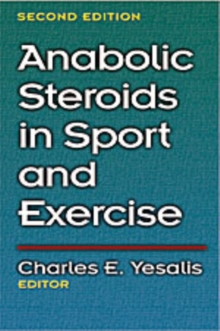 A recognised authority on drug abuse problems, Charles Yesalis presents new research findings on the use and abuse of steroids in sports and exercise.

Contribution from respected researchers provide information on steroid use within professional sports and among Olympic athletes.

In addition, new information on drug use among international student athletes, adolescents and body builders is explored.

This second edition also examines the effects of steroid use on health, with special emphasis on women's problems associated with steroid abuse.

The issue of drug dependency is discussed and descriptions of new and successful drug intervention programmes are presented.

This book also examines the continuing political controversies surrounding drug testing issues and the positions adopted by certain countries with respect to drug use among their athletes.