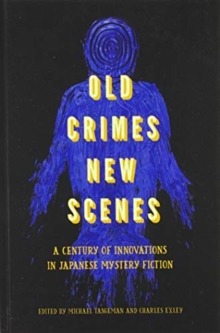 By the late nineteenth century, Japanese readers had access to translations of many of Europe and America's best mystery writers.

The popularity of the genre led to Japanese writers honestly translating these stories into Japanese; or to modifying the story according to the Japanese author's taste; and, sometimes to outright plagiarism of Western stories to be passed off as works by Japanese authors.

The popularity of mysteries was ensured in Japan, and the ensuing century-plus has seen remarkable examples of Japanese literary innovation. This volume highlights some of Japan's most creative responses to the mystery genre.

Some of the works are innovative because they were written by authors (or, in one case, a poet) who did not normally write mysteries.

Others are innovative for their variations on standard elements detective fiction, or for using mystery tropes to interrogate social norms such as social standing, or gender roles.

Some works play on technological innovations as keys to the mystery.

Some of the works are meta-fictive explorations of the mystery, using detective fiction to investigate detective fiction. Scholars, students and mystery readers alike will find this volume full of surprises.