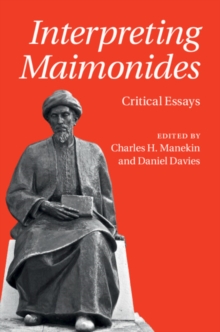 Moses Maimonides (1138-1204) was arguably the single most important Jewish thinker of the Middle Ages, with an impact on the later Jewish tradition that was unparalleled by any of his contemporaries.

In this volume of new essays, world-leading scholars address themes relevant to his philosophical outlook, including his relationship with his Islamicate surroundings and the impact of his work on subsequent Jewish and Christian writings, as well as his reception in twentieth-century scholarship.

The essays also address the nature and aim of Maimonides' philosophical writing, including its connection with biblical exegesis, and the philosophical and theological arguments that are central to his work, such as revelation, ritual, divine providence, and teleology.

Wide-ranging and fully up-to-date, the volume will be highly valuable for those interested in Jewish history and thought, medieval philosophy, and religious studies.