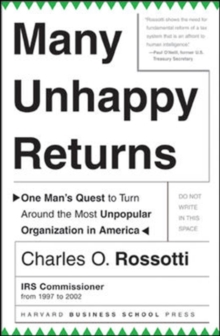 Many Unhappy Returns : One Man's Quest to Turn Around the Most Unpopular Organization in America Hardback

When Charles O. Rossotti became Commissioner of the Internal Revenue Service in 1997, the agency had the largest customer base - and the lowest approval rating - of any institution in America.

Mired in scandal, caught in a political maelstrom, and beset by profound management and technology problems, the IRS was widely dismissed as a hopelessly flawed enterprise.

In "Many Unhappy Returns", Rossotti - the first businessperson to head the IRS - recounts the remarkable story of his leadership and transformation of this much-maligned agency.

In the glare of intense public scrutiny, he effected dramatic changes in the way the IRS did business - while it continued to collect $2 trillion in revenue.