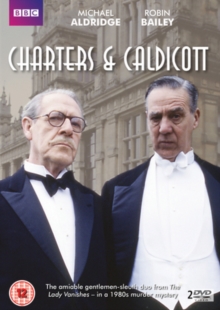 All six episodes from the 1985 BBC series based on the characters Charters and Caldicott from the 1938 Alfred Hitchcock film 'The Lady Vanishes'.

With Charters (Robin Bailey) and Caldicott (Michael Aldridge) now in retirement, their quiet lives take an unexpected turn when the body of a young girl is found in Caldicott's home and the pair pick up from where they left off, taking it upon themselves to solve the crime.

The episodes are: 'Petunia Day', 'Mix Well and Serve', 'Will the Real Jenny Beevers?', 'Not Cricket', 'Northern Lights' and 'Play Up, Play Up'.