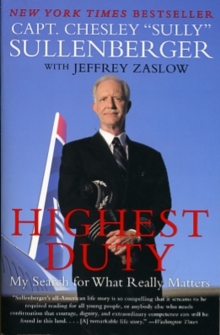 Highest Duty : My Search for What Really Matters Paperback / softback

by Chesley B., III Sullenberger

On January 15, 2009, the world witnessed one of the most remarkable emergency landings in aviation history when Captain Chesley Sully Sullenberger skillfully glided US Airways Flight 1549 onto the surface of the Hudson River, saving the lives of all 155 aboard.

His cool actions not only averted tragedy but made him a hero and an inspiration worldwide.

To Sullenberger, a calm, steady pilot with forty years of flying experience who is also a safety consulting expert, the landing was not a miracle but rather the result of years of practice and training-wisdom he gained in the cockpit of U.S.

Air Force jets and in his Texas boyhood. Born to a World War II veteran and dentist father and an elementary school teacher mother, Sully fell in love with planes early.

He learned to fly as an eager 16-year-old from a crop duster, an older neighbor in north Texas, who took off and landed his fragile plane on the grass field behind his house. While Sully's father encouraged his interest in flying, he also imparted stern advice he had learned from his Navy service during World War II: a commander is responsible for everyone in his care - and those words have shaped Sully's life and work and continue to guide him today. "Highest Duty" reveals the important lessons Sully learned through childhood, in his military service, and in his work as a commercial airline pilot.

At heart, it is a story of hope and preparedness - that life's challenges can be met if we're ready for them - reminding us that, even in these days filled with war, tragedy, and economic uncertainty, there are values still worth fighting for.

A few weeks after the crash, Sully discovered that he'd lost a library book about professional ethics, "Just Culture: Balancing Safety and Accountability", in the downed plane's cargo hold.

When he called the library to notify them, they waived the usual fees.

Mayor Michael Bloomberg replaced the book when he gave Sully the Key to the City in a New York ceremony.