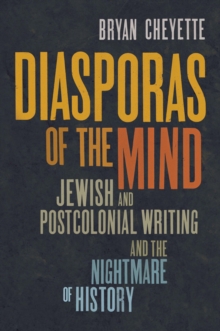 Diasporas of the Mind : Jewish and Postcolonial Writing and the Nightmare of History EPUB

In this fascinating and erudite book, Bryan Cheyette throws new light on a wide range of modern and contemporary writers—some at the heart of the canon, others more marginal—to explore the power and limitations of the diasporic imagination after the Second World War. Moving from early responses to the death camps and decolonization, through internationally prominent literature after the Second World War, the book culminates in fresh engagements with contemporary Jewish, post-ethnic, and postcolonial writers.
Cheyette regards many of the twentieth- and twenty-first-century luminaries he examines—among them Hannah Arendt, Anita Desai, Frantz Fanon, Albert Memmi, Primo Levi, Caryl Phillips, Philip Roth, Salman Rushdie, Edward Said, Zadie Smith, and Muriel Spark—as critical exemplars of the diasporic imagination. Against the discrete disciplinary thinking of the academy, he elaborates and argues for a new comparative approach across Jewish and postcolonial histories and literatures. And in so doing, Cheyette illuminates the ways in which histories and cultures can be imagined across national and communal boundaries.