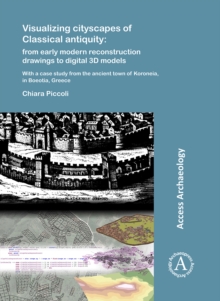 Visualizing cityscapes of Classical antiquity: from early modern reconstruction drawings to digital 3D models : With a case study from the ancient town of Koroneia in Boeotia, Greece Paperback / softback

The amount of 3D modelling applications in archaeology has increased enourmously over the last decade. 3D recording techniques allow researchers to quickly and accurately document archaeological evidence, and 3D reconstructions have created new possibilities to communicate the results to a larger public.

In this latter case, however, numerous scholars have expressed their concern regarding the ethics of such digital representations, since they give prominence to a crystallized image of the past and do not account for the complexity of the archaeological record.

The study presented here aims to make a practical contribution to a new understanding and use of 3D reconstructions, namely as 'laboratories' to test hypotheses and visualize, evaluate and discuss alternative interpretations.

In order to do so, an analysis of visual reconstructions of the early and late modern period is presented first, followed by a discussion of current applications of 3D digital reconstructions, with a special focus on cityscapes.

Lastly, a practical implementation of a research-driven, intellectually transparent and GIS-based 3D reconstruction is proposed for the urban site of Koroneia, in Boeotia, Central Greece.

Specifically, the methodology developed in this work uses tools that are employed in geo-design and modern urban planning in an innovative way, integrating GIS with a rule-based modelling approach.

With a strong focus on the automation and iteration of the reconstruction process, our 3D visualization provides an intuitive insight into hidden relationships and associations among data, and allows the creation and evaluation of alternative reconstruction hypotheses.