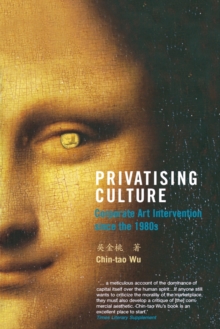 Corporate sponsorship and business involvement in the visual arts have become increasingly common features of our cultural lives.

From Absolut Vodka's sponsorship of art shows to ABN-AMRO Bank's branding of Van Gogh's self-portrait to advertise its credit cards, we have borne witness to a new sort of patronage, in which the marriage of individual talent with multinational marketing is beginning to blur the comfortable old distinctions between public and private.

Chin-tao Wu's book is the first concerted attempt to detail the various ways in which business values and the free-market ethos have come to permeate the sphere of the visual arts since the 1980s.

Charting the various shifts in public policy which first facilitated the entry of major corporations into the cultural sphere, it analyses the roles of governments in injecting the principles of the free market into public arts agencies--in particular the Arts Council in Great Britain and the National Endowment for the Arts in the USA.

It goes on to study the corporate take-over of art museums, highlighting the ways in which 'cultural capital' can be garnered by various social and business 'elites' through commercial involvement in the arts, and shows how corporations have succeeded in integrating themselves into the infrastructure of the art world itself by showcasing contemporary art in their own corporate premises.

Mapping for the first time the increasingly hegemonic position that corporations and corporate elites have come to occupy in the cultural arena, this is a provocative contribution to the debate on public culture in Britain and America.