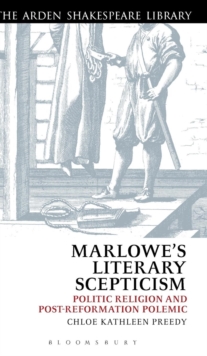 by Chloe (University of York) Preedy

Winner of the Roma Gill Prize 2015, Marlowe's Literary Scepticism re-evaluates the representation of religion in Christopher Marlowe's plays and poems, demonstrating the extent to which his literary engagement with questions of belief was shaped by the virulent polemical debates that raged in post-Reformation Europe.

Offering new readings of under-studied works such as the poetic translations and a fresh perspective on well-known plays such as Doctor Faustus, this book focuses on Marlowe's depiction of the religious frauds denounced by his contemporaries.

It identifies Marlowe as one of the earliest writers to acknowledge the practical value of religious hypocrisy, and a pivotal figure in the history of scepticism.