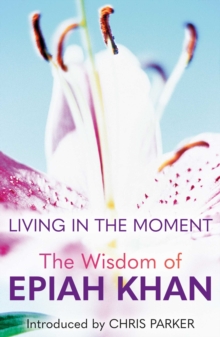 Living in the Moment : The Wisdom of Epiah Khan Hardback

Epiah Khan is an apocryphal Middle Eastern mystic, martial artist, writer and poet believed to have been born in Baghdad in 1860.

Much of Epiah's early life is a mystery, but it is known that he travelled to London in 1906 where he taught mysticism and his own brand of holistic martial arts for seven years.

He moved to Paris in 1913 and from there to Verdun, where he died during the longest battle of the First World War. Chris Parker began his study of meditation and martial arts in the 1970s.

He has been the custodian of Epiah Khan's writing for over 25 years.

In this introductory volume he offers us:* A brief history of Epiah Khan. * An essay about his writing style and the key themes he addresses. * An extract from an interview Epiah gave to Rhythm magazine in 1913. * 250 original sayings. Epiah Khan lived in a time of great change and upheaval and some of the quotes contained here reflect this.

Even so this collection shares timeless truths, lessons, insights and reminders that are as relevant today as they have always been; that will be as relevant tomorrow as they are today. This is wisdom of the ages and, no doubt, at different times different sayings will resonate more than others. Because, as Epiah Khan writes,'You find what you search for'