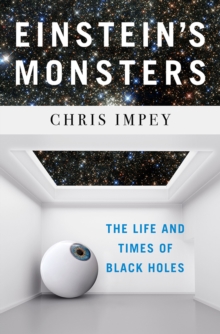 Einstein's Monsters : The Life and Times of Black Holes Hardback

by Chris (University of Arizona in Tucson) Impey

Black holes are the most extreme objects in the universe, yet every galaxy harbours a black hole at its centre.

In Einstein's Monsters, Chris Impey builds on this profound discovery to explore questions at the cutting edge of cosmology, such as what happens if you travel into a black hole and whether the galaxy or its black hole came first. Impey chronicles the role black holes have played in theoretical physics.

He then describes the phenomena that scientists have witnessed while observing black holes: dozens of stars swarming around the dark object at the centre of our galaxy; black holes performing gravitational waltzes with normal stars; the cymbal clash of two black holes colliding, releasing ripples in spacetime.

Einstein's Monsters is the incredible story of one of the most enigmatic entities in nature.