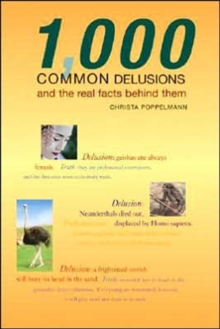 1, 000 Common Delusions : And the Real Facts Behind Them Paperback / softback

Certain 'facts' are accepted as absolute truths. This book debunks these persistent myths. From the stories of the ancient world to religion and sport, here are the real facts behind one thousand common fallacies that have long been assumed to be true.

Delusion: Stone Age humans lived in caves. Truth: they lived in huts and tents. The caves, decorated with hunting scenes and animal pictures were places of ritual ceremonies.

Delusion: Bagpipes were invented in Scotland. Truth: they were introduced into the British Isles by Caesar's legionnaires and originated in Asia Minor.

Delusion: the Wright Brothers were the first men to fly in a powered aeroplane.