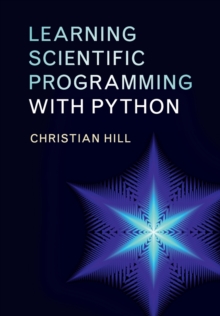 Learn to master basic programming tasks from scratch with real-life scientifically relevant examples and solutions drawn from both science and engineering.

Students and researchers at all levels are increasingly turning to the powerful Python programming language as an alternative to commercial packages and this fast-paced introduction moves from the basics to advanced concepts in one complete volume, enabling readers to quickly gain proficiency.

Beginning with general programming concepts such as loops and functions within the core Python 3 language, and moving onto the NumPy, SciPy and Matplotlib libraries for numerical programming and data visualisation, this textbook also discusses the use of IPython notebooks to build rich-media, shareable documents for scientific analysis.

Including a final chapter introducing challenging topics such as floating-point precision and algorithm stability, and with extensive online resources to support advanced study, this textbook represents a targeted package for students requiring a solid foundation in Python programming.