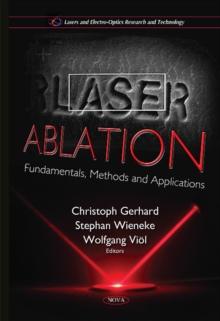 Laser ablation is an established and versatile tool in modern manufacturing.

At the same time, the basics and applications of laser ablation are the subject of numerous current research studies.

Both facts demonstrate a huge interest in the topic as well as the enormous potential of this technique for a number of applications, such as laser materials processing and laser-based materials testing.

This book addresses scientists, researchers and application engineers who work in the continuously growing field of laser ablation.

It also acts as a reference book for professors, lecturers and students of corresponding study courses or professional training programs.

Written by an international board of authors, this book provides an overview on laser sources used for laser ablation, the basics of laser beam guidance and shaping as well as laser-matter-interactions and the main underlying mechanisms of laser ablation.

Different laser-based material processing and modification methods along with specific applications and recent developments of laser ablation techniques are presented.

Laser-plasma-hybrid techniques, the laser-based fabrication of nanoparticles and heterostructures, and laser surface functionalisation are merely some of the methods aforementioned.

Furthermore, several laser-induced effects are discussed against the background of relevant applications in microelectronics, photovoltaics, packaging and patterning.