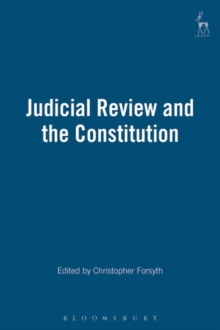 Judicial Review and the Constitution Hardback

This collection of essays presents opposing sides of the debate over the foundations of judicial review. In this work,however, the discussion of whether the 'ultra vires' doctrine is best characterised as a central principle of administrative law or as a harmless, justificatory fiction is located in the highly topical and political context of constitutional change.

The thorough jurisprudential analysis of the relative merits of models of 'legislative intention' and 'judicial creativity' provides a sound base for consideration of the constitutional problems arising out of legislative devolution and the Human Rights Act 1998.

As the historical orthodoxy is challenged by growing institutional independence, leading figures in the field offer competing perspectives on the future of judicial review. "Confucius was wrong to say that it is a curse to live in interesting times.