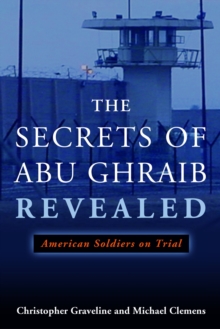 The news quickly spread worldwide, undermining the U.S. presence in Iraq. Despite several Department of Defense investigations and eleven courts-martial convictions, important questions remain about the events at Abu Ghraib.

Who are these soldiers? How involved were top administration officials and army generals in the abuses?

Were the soldiers simply following orders? Do these photographs depict a new American interrogation policy?

Christopher Graveline and Michael Clemens provide the answers. No one has investigated the true story behind the events at Abu Ghraib as thoroughly as the authors.

Only six people had complete knowledge of the Abu Ghraib investigation and prosecutions; Graveline and Clemens are two of them.

They give readers unprecedented access to the inner workings of the investigation leading to the trials of PFC Lynndie England, Cpl.

Charles Graner, and others. Complete with actual arguments of counsel, testimony, and evidence, this groundbreaking book puts the reader in the middle of the investigation and the subsequent trials, revealing one of the darker episodes in American military history.