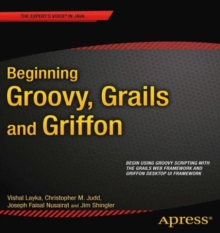 Web frameworks are playing a major role in the creation of today's most compelling web applications, because they automate many of the tedious tasks, allowing developers to instead focus on providing users with creative and powerful features.

Java developers have been particularly fortunate in this area, having been able to take advantage of Grails, an open source framework that supercharges productivity when building Java-driven web sites.

Grails is based on Groovy, which is a very popular and growing dynamic scripting language for Java developers and was inspired by Python, Ruby, and Smalltalk. Beginning Groovy, Grails and Griffon is the first introductory book on the Groovy language and its primary web framework, Grails. Griffon is also covered. While Grails is the Web framework for building Groovy Web applications, Griffon is the deskop framework for building desktop Groovy applications. Could Groovy be the new Java? It's light, fast and free (open source). This book gets you started with Groovy, Grails and Griffon, and culminates in the example and possible application of some real-world projects.

You follow along with the development of each project, implementing and running each application while learning new features along the way.