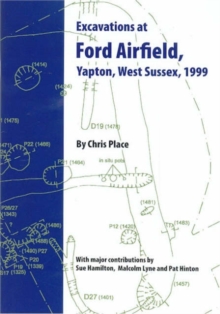 Excavations at the site of the former airfield at Ford, West Sussex revealed evidence of a prehistoric and Roman settlement dating from the beginning of the 1st millennium BC to the 2nd century AD.

The incomplete plan of a sub-rounded enclosure dating to the early 1st millennium BC was recovered, as was a substantial assemblage of later Bronze Age pottery with associated C14 dates.

Indications that the area had been enclosed by the late Bronze Age were also found - notably ditched trackways and contemporary field boundaries.

The enclosure was subsequently used for limited cremation burial in the later Iron Age, and a new co-axial field system was set out during this period on a different alignment to its predecessor.

A sub-rectangular enclosure was discovered, dating to the first century AD.

Evidence points towards only limited activity in the second century AD, and limited iron working in the final phase.