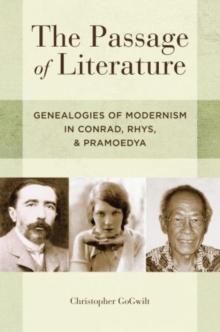 The Passage of Literature : Genealogies of Modernism in Conrad, Rhys, Pramoedya Paperback / softback

Yet given the generational and geographical boundaries that separated them, they are seldom considered in conjunction with one another.

The Passage of Literature unites the three in a bracing comparative study that breaks away from traditional conceptions of modernism, goingbeyond temporal periodization and the entrenched Anglo-American framework that undergirds current scholarship. This study nimbly traces a trio of distinct yet interrelated modernist genealogies.

The two novel sequences, penned years apart, narrate overlapping histories of imperialism in the Dutch East Indies, and both make opera central for understanding the cultural dynamic of colonial power.

Creole modernism-defined not only by the linguisticdiversity of the Caribbean but also by an alternative vision of literary history-provides a transnational context for reading Rhys's Good Morning, Midnight and Wide Sargasso Sea, each novel mapped in relation to the colonial English and postcolonial Indonesian coordinates of Conrad's The Shadow-Line andPramoedya's This Earth of Mankind.

All three modernisms-English, Creole, and Indonesian-converge in a discussion of the Indonesian figure of the nyai, a concubine or house servant, who represents the traumatic core of transnational modernism.

Throughout the study, Pramoedya's extraordinary effort to reconstruct the lost record of Indonesia's emergence as a nation provides a model for reading each fragmentary passage of literature as part of an ongoing process of decolonizing tradition. Drawing on translated and un-translated works of fiction and nonfiction, GoGwilt effectively reexamines the roots of Anglophone modernist studies, thereby laying out the imperatives of a new postcolonial philology even as he resituates European modernism within the literary, linguistic, and historical context of decolonization.