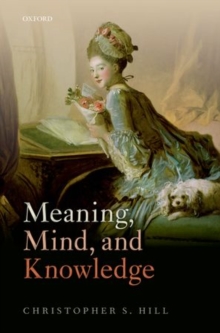 In this collection of essays, most of which are of recent vintage, and seven of which appear here for the first time, Christopher S.

Part I presents a deflationary theory of truth, argues that semantic properties like reference and correspondence with fact can also be characterized in deflationary terms, and offers an account of the value of these 'thin' properties, tracing it to their ability to track moresubstantial properties that are informational or epistemic in character.

Part II defends the view that conscious experiences are type-identical with brain states.

In the end, however, it maintains that theories of experience based on type-identity should give way to representationalist accounts.

Part III presents a representationalist solution to the mind-body problem.

It argues that all awareness, including awareness of qualia, is governed by a Kantian appearance/reality distinction-a distinction between the ways objects and properties arerepresented as being, and the ways they are in themselves.

It also presents theories of pain and visual qualia that kick them out of the mind and assign them to locations in body and the external world.

Part IV defends reliabilist theories of epistemic justification, deploys such theories in answeringCartesian skepticism, responds critically to Hawthorne's lottery problem and related proposals about the role of knowledge in conversation and practical reasoning, presents a new account of the sources of modeal knowledge, and proposes an account of logical and mathematical beliefs that represents them as immunune to empirical revision.