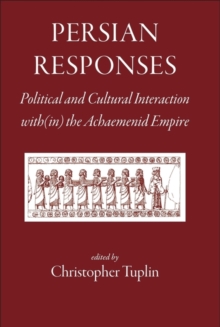 A generation ago the Achaemenid Empire was a minor sideshow within long-established disciplines.

For Greek historians the Persians were the defeated national enemy, a catalyst of change in the aftermath of the fall of Athens or the victim of Alexander.

For Egyptologists and Assyriologists they belonged to an era that received scant attention compared with the glory days of the New Kingdom or the Neo-Assyrian Empire.

For most archaeologists they were elusive in a material record that lacked a distinctively Achaemenid imprint.

Things have changed now.The empire is an object of study in its own right, and a community of Achaemenid specialists has emerged to carry that study forward.

Such communities are, however, apt to talk among themselves and the present volume aims to give a professional but non-specialist audience some taste of the variety of subject-matter and discourse that typifies Achaemenid studies. The broad theme of political and cultural interaction reflecting the empire's diversity and the nature of the sources for its history is illustrated in fourteen chapters that move from issues in Greek historiography through a series of regional studies (Egypt, Anatolia, Babylonia and Persia) to Zarathushtra, Alexander the Great and the early modern reception of Persepolis.