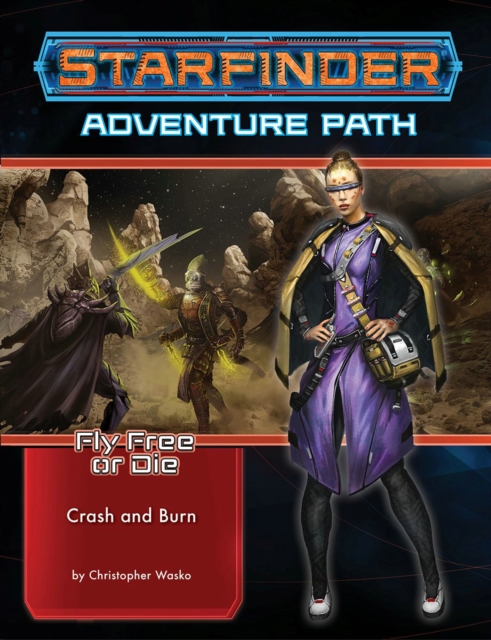 The crew of the Oliphaunt have been living the goodlife, riding high after robbing a Kalistocracy commerce barge.

But when oldenemies join forces, the crew loses it all-their fortune, their reputations, andeven the Oliphaunt itself!

Now they're trapped on Absalom Station with nothingbut the clothes on their backs.

They'll have to cash in every favor, rely onevery friend they've ever made, dodge bounty hunters and assassins, and rebuilda junk starship that barely flies if they hope to catch their enemies andreclaim what's theirs!"Crash and Burn" is aStarfinder adventure for four 9th-level characters.

This adventure continues theFly Free or Die Adventure Path, a six-part monthly campaign in which playerstake on the role of a merchant crew with an experimental starship, trying to getrich, escape interplanetary assassins, and outwit their rivals.

This volume alsoincludes a series of "Side Jobs"-short mini-adventures the GM can insert intothe campaign at any time-as well as a collection of new and dangerous aliens anddetails on the corporations that dominate thegalaxy. Each monthly full-color softcoverStarfinder Adventure Path volume contains a new installment of a series ofinterconnected science-fantasy quests that together create a fully developedplot of sweeping scale and epic challenges.

Each 64-page volume of theStarfinder Adventure Path also contains in-depth articles that detail and expandthe Starfinder campaign setting and provide new rules, a host of exciting newmonsters and alien races, a new planet to explore and starship to pilot, andmore!