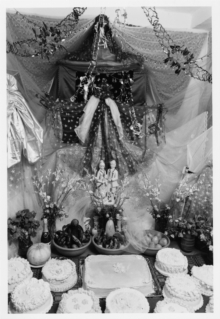 Crossing the Water : A Photographic Path to the Afro-Cuban Spirit World Hardback

In the summer of 2000, two award-winning photographers, Claire Garoutte and Anneke Wambaugh, were researching Afro-Cuban religious practices in Santiago de Cuba, a city on the southeastern coast of Cuba.

A chance encounter led them to the home of Santiago Castaneda Vera, a priest-practitioner of Santeria, Palo Monte, and Espiritismo, a Cuban version of nineteenth-century European Spiritism.

Out of that initial meeting, a unique collaboration developed.

Santiago opened his home and many aspects of his spiritual practice to Garoutte and Wambaugh, who returned to his house many times during the next five years, cameras in hand.

The result is Crossing the Water, an extraordinary visual record of Afro-Cuban religious experience.A book of more than 150 striking photographs in both black and white and color, Crossing the Water includes images of elaborate Santeria altars and Palo spirit cauldrons, as well as of Santiago and his religious "family" engaged in ritual practices: the feeding of the spirits, spirit possession, and private and collective healing ceremonies.

As the charismatic head of a large religious community, Santiago helps his godchildren and others who consult him to cope with physical illness, emotional crises, contentious relationships, legal problems, and the hardships born of day-to-day survival in contemporary Cuba.

He draws on the distinct yet intertwined traditions of Santeria, Palo Monte, and Espiritismo to foster healing of both mind and body-the three religions form a coherent theological whole for him. Santiago eventually became Garoutte's and Wambaugh's spiritual godfather, and Crossing the Water is informed by their experiences as initiates of Santeria and Palo Monte.

Their text provides nuanced, clear explanations of the objects and practices depicted in the images.

Describing the powerful intensity of human-spirit interactions, and evoking the sights, smells, sounds, and choreography of ritual practice, Crossing the Water takes readers deep inside the intimate world of Afro-Cuban spirituality. 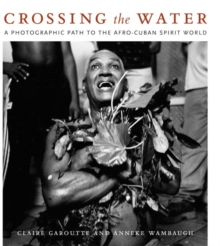