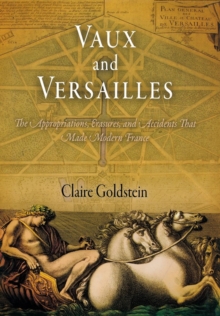 Vaux and Versailles : The Appropriations, Erasures, and Accidents That Made Modern France Hardback

Versailles has long been the consummate symbol of Louis XIV's distinct political and aesthetic influence, the epicenter of French national identity and classical style.

From furniture and fashions to gardens and typefaces, the objects that define style underwent dramatic innovation during the very decade of Versailles's creation.

In all this, the creation of Versailles has been represented as providing a foundational moment for both modern political subjectivity and French cultural hegemony. Before Louis started work on Versailles, however, there was another center of innovation: his finance minister, Nicolas Fouquet's chateau Vaux-le-Vicomte.

Vaux was, for a few short years, the country's artistic capital, It was at Vaux, that, after years of civil war and division, Fouquet modeled a unified France by assembling the country's most important thinkers, writers, and artists at an artistic court that privileged liberal rule, the autonomy of the individual, and harmonious collaboration among formerly divided factions.

Yet within a few months of Vaux's completion, the king had Fouquet jailed and recruited the minister's stable of writers, artists, weavers, and gardeners to Versailles. Claire Goldstein shows how the connection between Vaux and Versailles is at the heart of classical style, a connection made by political repression, theft, and erasure.

Goldstein retraces the unacknowledged roots of Versailles in Fouquet's short-lived experiment, and destabilizes any easy understanding of the court of the Sun King as the origin of French national style.

Recounting how trees and tapestries, gardeners and writers were sometimes forcibly removed from one palace to the other-and how their meanings were transformed in the process-she discovers in the apogee of classicism the remnants of a repressed cultural vision.